It was a rainy summers day in Cornwall, when a rare occurrence took place: comparative demographers gathered in the masses. They brought ideas, laughter, heaps of data, and collaborative thoughts and, despite some uncooperative travel troubles, they got their heads down and began to tackle the demographic problems of the 21st century. The 10-day Cornish demographic extravaganza began with an introductory workshop where early career academics working with the COMPADRE Plant Matrix Database and COMADRE Animal Matrix Database educated the ‘scientists of the future’, aka MRes, PhD students and postdocs, about the importance of vital rates for conservation success. Vital rates you say? These rates describe how individuals within a population grow, reproduce and die; this information can be used to determine how likely a population is to expand, shrink, invade or even become extinct. Although encouraging scientists early on their career that mathematical ecology and comparative (desk-base!) studies are the key to our conservation problems is challenging at times, the workshop went swimmingly and the lecturers empowered the protégé demographers to follow in their academic footsteps.

Ruth Archer, Jenni McDonald, Owen Jones (left photo) and Rob Salguero-Gomez ran a 3-day workshop on the comparative power of the COMPADRE Plant Matrix Database and the COMADRE Animal Matrix Database at the Cornwall campus of the University of Exeter for some ca. 20 graduate students and postdocs.

This 3-day demographic teaser was followed by the main event. A thrilling international opportunity funded by the European research council, to bring together a world-class set of researchers with a focus on comparative demography and life history evolution, to work together for a full week. 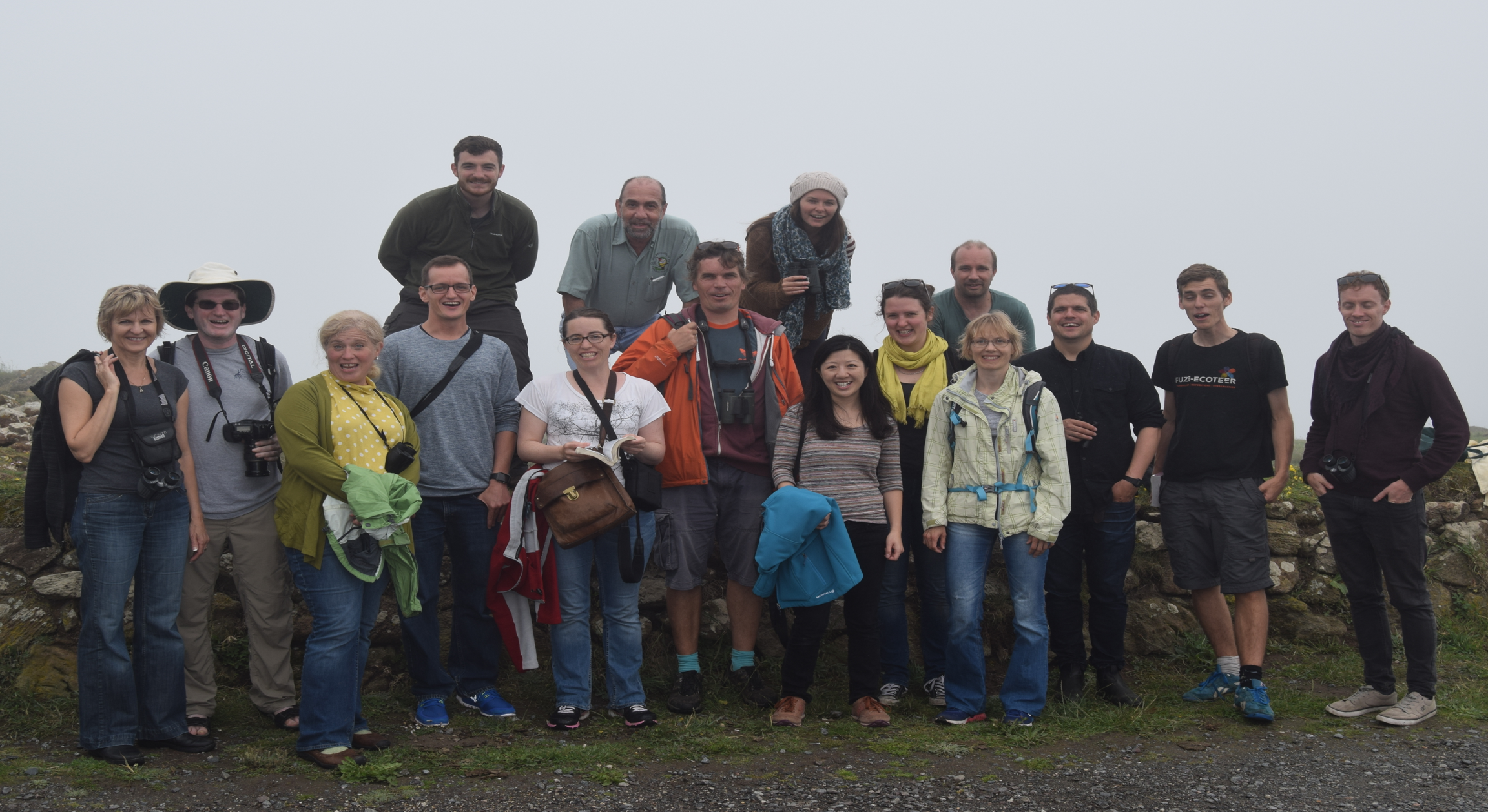 The agenda was set by the SPAND_EX king, der Hodgsonmeister, who, in collaboration with the international researchers, discussed the need to highlight the "sins" found throughout the demographic literature, and demonstrated them to the scientific community. Gluttony, greed, sloth spilled onto the blank canvas…..wrath, envy, pride, shortly followed by lust…….. 7 sins turned into 10, than 12, 13 and even more……. this posed a big problem for the team. Seven sins…….. 14 crimes, 7 sins……. 14 crimes. The team pondered about this, the facts did not match the catchy title…… a testing problem to be solved by one of the newest members of the team COMPADRINO Simon Rolph (see photo above). Day 2 began with the CDO duo – Computing Development Officers, Francesca Sargeant and Danny Buss, at the COMPADRE Exeter node, spilling the beans on the transformation of the COMPADRE database into a modern, speedy, query-able SQL storage machine. This raised much discussion: who was going to secure the funding? is the database going to transform into something more?  will COMADRE follow the same footsteps as COMPADRE? will the CDO team really go back down to nil by October this year?... All of these conversations were then taken by the COMPADRE core committee to the 3rd annual committee, which took place in Odense, Denmark, the week after. 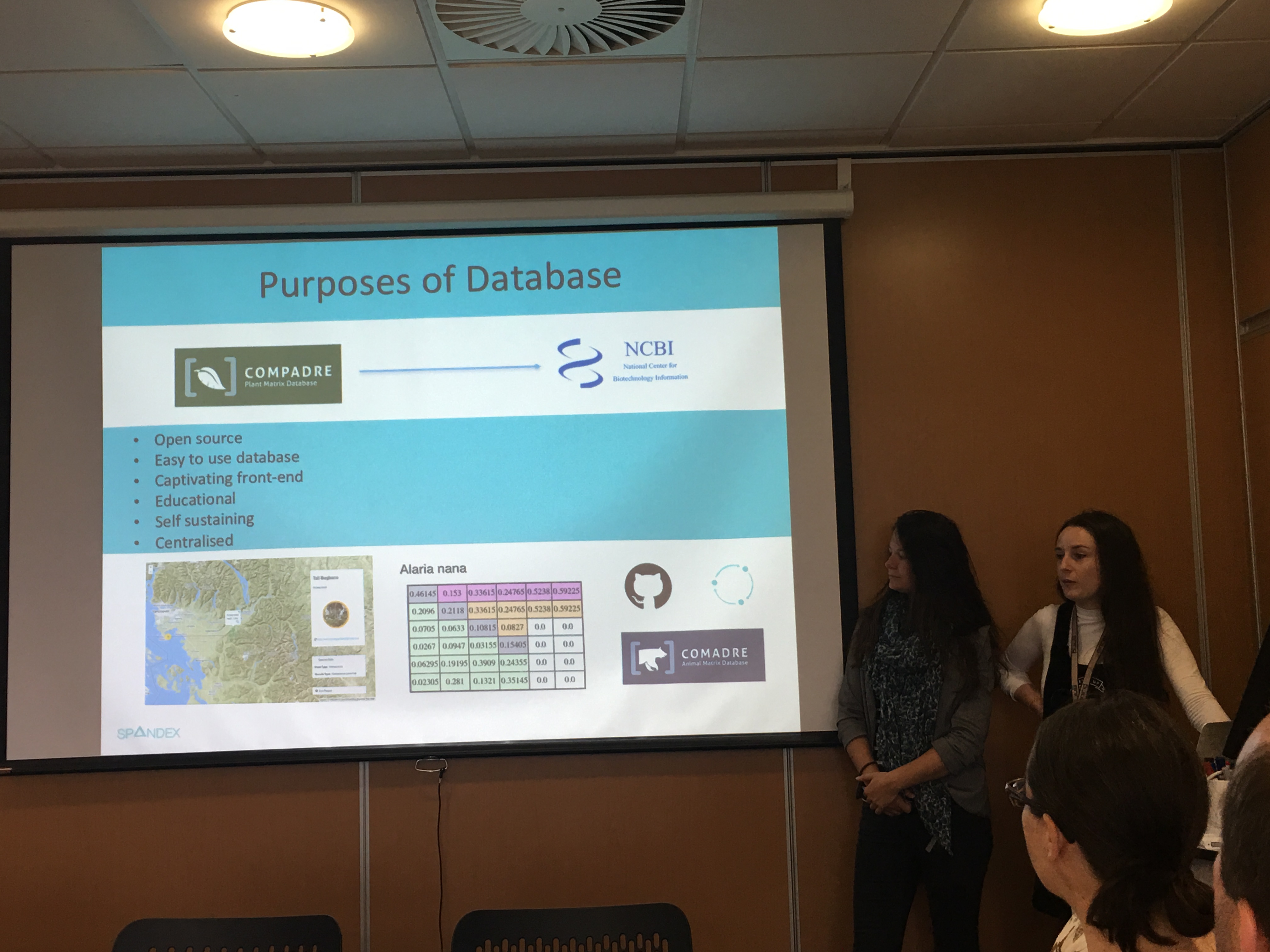 Danny Buss (left) and Francesca Sargent (right) discuss with the group of international demographers the latest developments that they have championed during the last year at the COMPADRE Exeter node: COMPADRE is currently undergoing an internal re-make, with SQL capabilities, and graphical displays for teaching purposes, with interactivity with IUCN and other open-access repositories.

The excitement began in the final days, where the mathematical challenges, unanswered ecological questions and exciting comparative techniques spilled from the minds and onto the whiteboards……. could the team come up with some solutions to……. Phylogenetic gap analysis for ecological traits……… a better understanding of the complex relationship between environmental drivers and demographic rates…….. or even, the burning answer to why does phylogenetic signal differ for demographic traits between fauna and flora, are plants and animals really that different? After plenty of discussions, food, Cornish dolphins, botany and statistical analysis…….. the team was ready to begin their outputs. I hope you are all looking forward to some highly interesting publications to be released over the next year or two - I know I am!

A huge thank you goes out to the team at NERC who provided the funding for such an extraordinary collaborative event, I really hope we can re-convene together again next year. Danny Buss, Computer Development Officer COMPADRE - Exeter node